The government wants Ghanaians to ignore ‘desperate’ claims by former President John Dramani Mahama that President Nana Addo Dankwa Akufo-Addo to a US$40,000 bribe from the wife of a former Mahama appointee.

The allegation in contained in a secretly shot video, which has gone viral, showing an man and woman giving Nana Akufo-Addo a brown envelope purported to be containing US$40,000 plus one thousand t-shirts as their campaign support.

In the video, the givers stated that it was their campaign support and that the t-shirt had the pictures of both Nana Addo and his running mate, Dr. Mahamudu Bawumia.

They even said they had shared some of the t-shirt already and they will be sharing some more in Kumasi on their visit to the place.

But in the few days to the 2020 elections, the NDC and it flagbearer, John Mahama have pieced the video together to suggest the US440,000 is a bribe Nana Addo took while he was president and not campaign support.

John Mahama and some NDC leaderships have since made reference to a supposed video of President Akufo-Addo receiving $40,000 as bribe.

But Government says, it is shocked and disappointed that John Mahama and his party have resorted to falsehood and fabrications in the build-up to the general elections just to tarnish the image of the President.

A statement from the government signed by the Information Minister, Kojo Oppong Nkrumah indicated that “the government of Ghana noted without much surprise, a desperate attempt by the campaign of John Mahama to falsely accuse the President of the Republic, Nana Addo Dankwa Akufo-Addo of bribery”.

According to the government, the false accusation is premised on a doctored video of a 2016 campaign donation to then-candidate Akufo-Addo.

“Characteristic of the NDC’s reliance on waging a campaign of lies, fake news and fabrications, the opposition candidate and his party have now sponsored the doctoring of this video and superimposed it with new voices to create the false impression that it is a post-2016 event showing the President receiving a bribe”, portions of the statement read.

Government has therefore asked the public and the media to be vigilant in order not to fall prey to the antics of “these persons who desperately desire to tarnish the image of the Republic for their own selfish, parochial, partisan ends”.

It added that, “President Akufo-Addo has never been involved in any untoward conduct, let alone take a bribe. The original footage of the incident shows it dearly as a 2016 campaign donation and nothing more”, the release concluded. 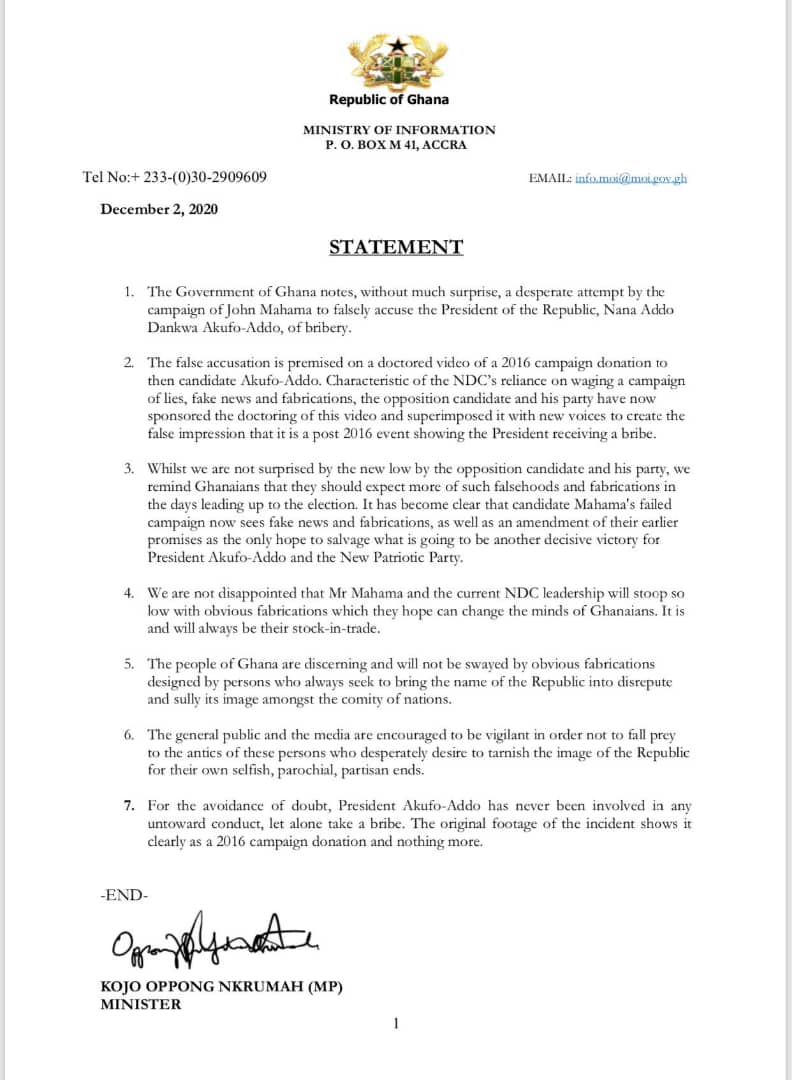 Meanwhile, the New Patriotic Party (NPP) has threatened to sue any media house that have televised the secret video purporting that President Nana Akufo-Addo was caught taking US$40,000 bribe.

The governing party says it is unethical and unprofessional for traditional media houses to circulate the video as it defames the President.

At a press conference in Accra, Deputy Campaign Manager for NPP, Dr. Mustapha Abdul-Hamid said the incident happened in 2016 when a party supporter donated the funds to support the NPP campaign.

He then punched the NDC as being incompetent at faking video, saying “you take old videos of campaign donation and distort it, seeking to make it look like a recent video, come on. Is the NDC too incompetent to fake a video correctly? You want to run a nation and can’t even fake things.”

“Listen to the narrative they attached to the video, that the president took a bribe of $40,000. This in 2016 was equivalent to GHS168,000. Really? And they think that people will believe? Let’s even escalate it to $40,000 at the current rate, that will give GHS230,000. It cannot even buy the engine of the Ford expedition that candidate Mahama took,” he added.

How Australian High Commission in Ghana is contributing to SDG 6

By NEWSWIRE GH16 hours ago
Headlines

Otokunor graduates with PhD in Agric Economics from UG