The government wants us to believe that Ghana’s current economic woes are the result of the Covid-19 pandemic. That’s not true.  Long before Ghana recorded its first Covid case on 12th March 2020 – at least two years before that – the economy was hurtling towards a ditch, thanks to pervasive mismanagement by those in charge. Covid only exposed the inevitable.  Understanding what happened is crucial to navigating the difficulties of the present and confronting the uncertainties of the future.

The government boasted that it could do better and reiterated its manifesto pledge to grow the economy by “double digit… annually for the next four years”.  It seemed, for a while, to be on the way to doing just that when growth in 2017 came in at a blistering 8.1%. The vice president, who is also chairman of the economic management (EMT), was hailed for his leadership prowess.

But it was all a mirage, a statistical illusion, thanks to an unsustainably high growth of 80.3% in the petroleum sector in 2017 from a decline of 15.6% in 2016 (negative growth rates always magnify subsequent positive growth rates). Once petroleum sector growth settled at a more reasonable rate of 3.6% in 2018, the illusion was gone and the government suddenly faced the daunting task of actually growing an economy without the help of any statistical distortions.  It failed. Miserably.

Rather than busying himself with economic management, the finance minister took to dazzling the public with his Bible knowledge whilst simultaneously indulging in the unchristian behaviour of throwing shade at the former president, John Mahama, over his economic record. The vice president worked hard to out-shade the finance minister by continuously questioning Mr. Mahama’s intelligence and his ability to “read the data”.

As it turned out, it was the EMT, including the finance minister, that was incapable of reading data, for as they shaded, insulted, boasted and goofed off, the wheels on the Ghanaian economy gradually started coming off, leading key sectors of the economy into a ditch by the close of 2019, well before Covid.

In the midst of all that, the vice president organised a lecture, complete with misleading graphs and tables, to tout his record.  But the economy knew better and it kept disintegrating. The water and sanitation sector fared even worse, as growth fell from 8.2% in the first quarter of 2018 to as little as 1.3% in just two quarters before moving full speed into negative territory.  By the end of 2019, output in the sector was 4.4% lower than it was in 2018. With population growth, this meant that Ghanaians were made worse off, waterwise.

The more dynamic construction sector shrank at the same rate, 4.4%, in 2019, taking with it jobs, incomes, and of course potential government revenue, as other sectors of the economy also haemorrhaged from overall economic mismanagement. 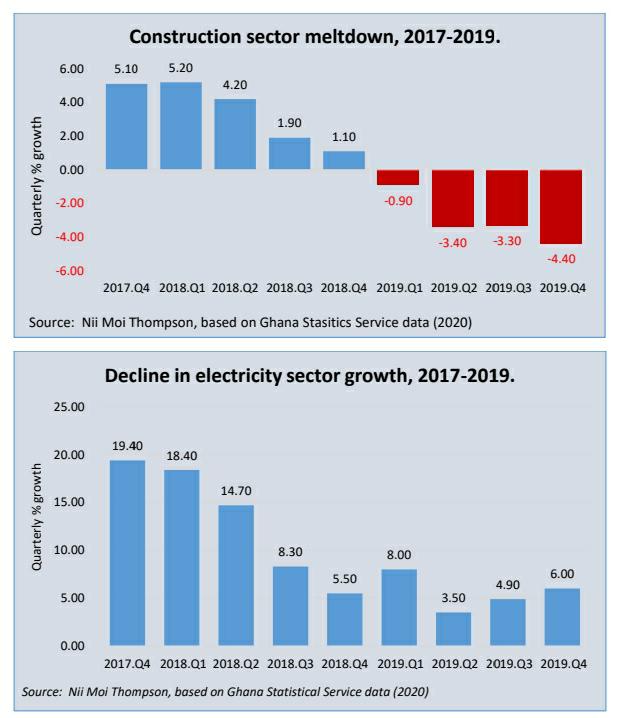 At this point, politics, not the collective national interest, seemed to drive development policy.  Therefore, instead of using the abundant electricity they inherited from the previous government to turbo-charge the country’s industrial development, the government took to demonising Mr. Mahama for producing too much electricity! As a result, between the fourth quarter of 2017 and the end of 2019, electricity sector growth fell by nearly 70.0%.

With dumsor rebooted in early 2021, it is unlikely that we would meet the 2021 target or the target of 1,433 kWh by 2025, all due to a politics of vindictiveness that ignores the national interest and feeds individual vanities. Indeed, Ghana may still be a struggling lower middle-income country by 2057 if we continue this way.

But EMT incompetence is only part of the story, the other being the botched financial sector reforms by the Bank of Ghana, which eviscerated the sector.  Between 2017 and 2019, the financial sector contracted at an average of 6.6% per quarter, a sharp contrast to the average quarterly expansion of 12.5% in the 12 quarters between 2014 and 2016.  The Bank had dismissed all advice to moderate the impact of the reforms and allow medium-size banks to operate in niche markets with lower minimum capital requirements.  Today, Ghanaians are being called upon to bear the cost of these misguided policies whilst those who imposed them go about with impunity.

And then there is the sticky business of rapid debt accumulation with little or nothing to show in the form of infrastructure development. Between 2018 and 2019 alone, the government raised US$5 billion in eurobonds, compared to a combined US$4.5 billion in eurobonds by previous governments between 2007 and 2016. Of the total U$17.5 billion in eurobonds that Ghana would have raised between 2007 and 2021, US$13 billion (74.0%) would be under the current government.  Yet infrastructure spending has consistently fallen short of budget as recurrent expenditures eat deep into the fiscus.  The dogged pursuit of the Agyapa deal by the government despite vocal opposition from the public could only mean that there are bigger and troubling surprises in store for Ghanaians.

To be sure, Covid-19 did do some harm to parts of the economy, especially the hospitality and gastronomy sector, but the broader and deeper harm had long been done by the government before the pandemic struck.

The original 2020 budget, for instance, forecasted a growth rate of only 6.8% for the year, and even that was projected to decline to 4.9% in 2021 and 4.6% in 2022, moving the economy away from the double-digit growth that the government had confidently promised in its manifesto.

What we had was the absence of a clearly articulated strategy for economic growth and social development.  The initial surge in spending on social programmes, such as free SHS, and governance reforms, such as the creation of six new regions and 44 additional districts, was without regard for the need to grow the economy consistently, at least at high single digits, for government to raise the needed revenue to sustain the increased spending.  Indeed, revenue shortfalls from slower growth were equivalent to US$ 1 billion, the same amount the government secured from the IMF at the start of the pandemic.

Now growth must be prioritised, but the capacity to manage it must also be enhanced, corruption and waste must be tackled, and propaganda must give way to sound development policies.  In short, the EMT must sit up!

By NEWSWIRE GH1 day ago
Opinions

By NEWSWIRE GH3 days ago
Opinions

The ‘Covenant’ – What is the way forward for the National Cathedral?

By NEWSWIRE GH5 days ago
Opinions