Prince Harry has said he was caught in a cycle of “pain and suffering” in the British royal family and hinted that he is heavily critical of the way his father, Prince Charles, raised him, in a lengthy and personal new interview.

The Duke of Sussex was talking to actor Dax Shepard, host of the “Armchair Expert” podcast, in an episode released Thursday.
Discussing his upbringing as a royal, he said: “When it comes to parenting, if I’ve experienced some form of pain or suffering because of the pain or suffering that perhaps my father or my parents had suffered, I’m going to make sure I break that cycle so that I don’t pass it on.”
“It’s a lot of genetic pain and suffering that gets passed on anyway so we as parents should be doing the most we can to try and say ‘you know what, that happened to me, I’m going to make sure that doesn’t happen to you’,” he added.
And Harry said that as he grew older, he realized that Charles raised him in the way that he had previously been raised.
“I never saw it, I never knew about it, and then suddenly I started to piece it together and go ‘OK, so this is where he went to school, this is what happened, I know this about his life, I also know that is connected to his parents so that means he’s treated me the way he was treated, so how can I change that for my own kids?,” Harry said.
The Prince previously said that Charles stopped taking his calls after he and Meghan, Duchess of Sussex quit as working members of the family.
During the new interview, he was referenced an infamous trip he took to Las Vegas during which a nude photo of him was leaked to British press. “At least I wasn’t running down the Strip,” he joked. 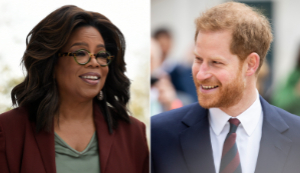 Apple TV+ announces Oprah Winfrey and Prince Harry series debut date
Harry also described “going wild” in his early twenties and partying, and outlined his inner monologue as he struggled with the responsibilities of being a member of the royal family.
“I don’t want this job, I don’t want to be here, I don’t want to be doing this, look what it did to my mum,” Harry recalled thinking.
He also talked about the media in the UK. “It’s a mix between ‘the Truman Show’ and being in a zoo,” he said, referencing the 1998 Jim Carrey film in which the main character has no idea he is living on a giant TV set where his every move is recorded.
The Prince also discussed the extent to which he and Meghan tried to keep their burgeoning relationship under wraps, how it felt to grow up in the media spotlight and his new life in the US.
Harry recalled how the attention affected the early stages of his relationship with Meghan.
“The first time that Meghan and I met up for her to come and stay with me we met up in a supermarket in London pretending as though we didn’t know each other,” he said, recounting how he wore a baseball cap pulled down over his eyes to avoid being recognized.
While criticizing the behavior of some media outlets in the US, Harry did say the situation has improved for him and his family since they moved to California.
It was announced in February that Harry and Meghan would not be returning as working members of the royal family, after stepping back from royal duties last year.
“Living here now I can actually lift my head and actually I feel different… you can walk around feeling a little bit more free,” he said.
“I get to take Archie on the back of my bicycle… I would never have had the chance to do that.”
During the podcast, Harry went on to discuss changing attitudes towards mental health in society.
“Speaking out, especially now in today’s world, is a sign of strength rather than a sign of weakness,” he said, before making a case that mental health is in fact public health.
“Two of the biggest issues that we’re facing in today’s world, I think, is the climate crisis and mental health, and they’re both intrinsically linked,” he said.

By NEWSWIRE GH18 hours ago
International

By NEWSWIRE GH19 hours ago
Entertainment

By NEWSWIRE GH5 days ago
Entertainment