For three days, Goldi Patel, 25, went from hospital to hospital in New Delhi’s oppressive summer heat, frantically trying to find one that would keep her husband breathing.

Four hospitals turned away Patel, who is seven months pregnant with the couple’s first child, before she finally found one that would take him. But the level of care at Sardar Patel Covid Care Centre and Hospital, a makeshift pandemic facility on the outskirts of the capital, is so lacking that her husband is begging to leave.
Around Sadanand Patel, 30, people are dying. He has barely any contact with doctors, and limited medicine. With 80% of his lungs already infected, he’s terrified of what happens if his condition gets worse.
“I am very scared,” Sadanand said Saturday from his hospital bed, through labored breathing. “If my health gets critical I don’t think they will be able to save me.”
As coronavirus cases spiral in India, the country’s health care system has been stretched beyond breaking point. Beds, oxygen and medical workers are in short supply. Some Covid patients are dying in waiting rooms or outside overwhelmed clinics, before they have even been seen by a doctor.
Only some Covid-19 patients manage to get admitted into India’s overburdened hospitals. But once inside, some face a different kind of terror: an absence of medical care or supplies as people die around them. 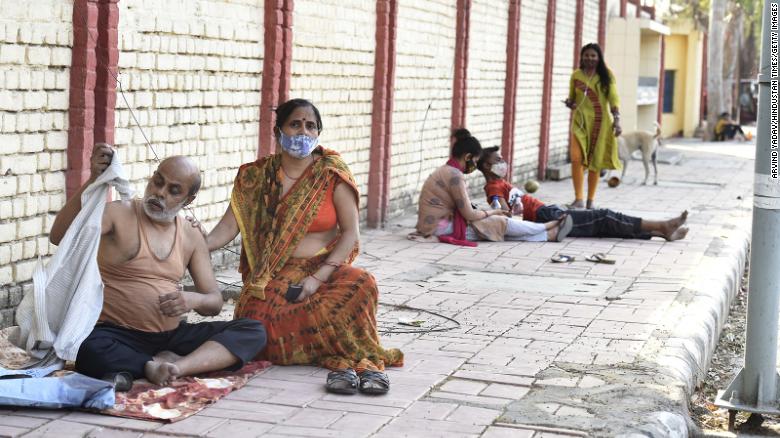 In February officials ordered the closure of the Sardar Patel Covid Care Centre, believing India had conquered the virus.
When it became abundantly clear that was not the case, the 500-bed facility reopened on April 26, to chaotic scenes.
Local media reported that despite huge lines of patients outside the hospital, far fewer people were admitted than capacity. Senior officials from the Health Ministry and the Indo-Tibetan Border Police, who run the center, did not respond to CNN’s request for comment.
Sadanand was admitted the day after the hospital opened. When Goldi visited a few days later, the facility was crowded, she said. 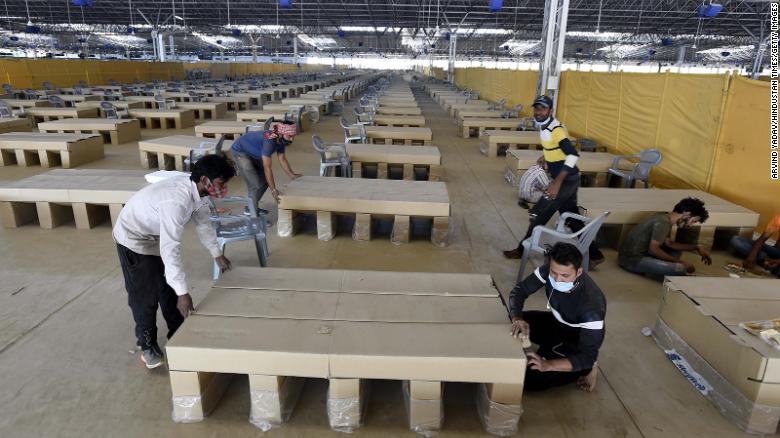 A view inside the Sardar Patel Covid-19 Care Centre, at Chhatarpur, on April 25, 2021 in New Delhi, India.
In the cavernous, warehouse-style facility, some patients lie on beds made of cardboard. There is limited medicine, and Sadanand said he had only interacted with a doctor once or twice in three days since he was admitted last Tuesday. He watched two men in beds nearby scream for medicine only to die within hours when their oxygen appeared to run out.
By Saturday, his fifth day in the center, at least five people around him had died, he said. One dead body lay on the bed next to his for hours before it was removed.
India’s Ministry of Health and Family Welfare said last month that it would “swiftly” expand the facility to 2,000 beds with oxygen supplies to help address the city’s lack of hospital space. About 40 medical doctors and 120 expert paramedics had already been dispatched to the center. 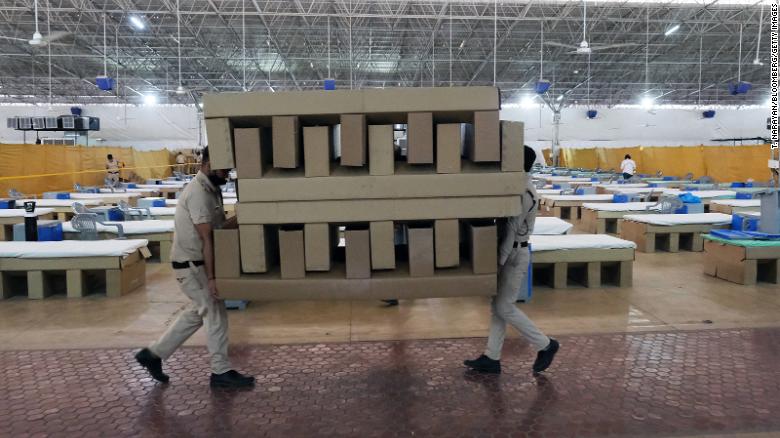 Workers carry biodegradable cardboard beds in a makeshift ward at the Sardar Patel Covid Care Centre and Hospital in New Delhi, India, on April 24, 2021.
But that target doesn’t tally with Sadanand’s experience.
“The government thinks that they have opened this hospital, the patients here are getting treated,” he said. “But actually, nothing like that is happening.”
The doctors check on patients infrequently, Sadanand said. He’s worried that if he needed medical attention, he would be too ill to call for help. Sometimes he talks with a patient in a nearby bed who advised him to get out of the center if he feels even slightly better. 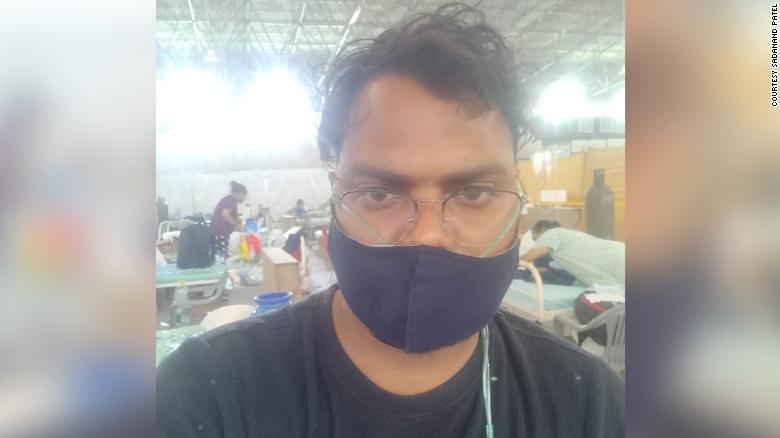 Sadanand Patel at Sardar Patel Covid Care Centre.
“You will die lying on your bed because there’s no one to call the doctor,” he said.
Others have had the same experience. Sarita Saxena told CNN Friday her brother-in-law was admitted to the center after being turned away by at least seven hospitals. She doesn’t believe any doctors are treating the patients — the only people caring for them are family and friends. Those people risk catching Covid as there are no walls within the center to stop the spread.
Others outside the hospital are so worried about the lack of care that they are trying to get their relatives discharged.
Sadanand says he is so scared he repeatedly asked a doctor to shift him to another hospital. He made the same plea to his wife — but no where else will take him, Goldi says.
“He was asking me to take him away from this place, that he’ll stay home, he doesn’t feel good here and he’s very scared,” Goldi said Saturday.
“I kept trying to explain that if you stay here, at least you will get oxygen.”
Source: CNN
Post Views: 217

By NEWSWIRE GH4 days ago
News