For a little over a week now, ours has been a nation sharply divided over hair and why a brilliant kid, Tyrone Iras Marhguy, cannot live his dream of attending Achimota if he cannot accept the reality of cutting down his locks. From the floor of Ghana’s Parliament, through to social media, the conversation about hair has been ‘bloody’ or anything but temperate. Neither Achimota SHS, nor the boy and his family have been spared the effusions of the angry mob. Like snipers, shots have been fired from supporters of Tyrone aiming to break what they say is the great Chinese wall of bigotry, mindless, primitive, intolerant, backward acts of discrimination and lawlessness against minority groups in Ghana. In firing their shots some have attempted a history lecture on slavery and colonialism and how that, they say have eaten away the mental capacity of those who are in vehement support of Achimota’s decision to maintain low hair-cut policy which has been implemented for years in Achimota and across public schools in Ghana.

The supporters of Achimota have not been idle. They have fired back insisting on the sanctity of rules which have to be observed and obeyed especially at the basic school or risk opening the floodgates of religious expressions if the obstinate position of Tyrone and his siblings is allowed to stand in Achimota. In defence of Achimota, some have sadly made insidious comments about why Tyrone should not be tolerated with his hair on.

Yet there are those who are gravitating towards a middle ground, emphasizing the need for a bigger discussion on the matter to identify the point of intersection between the rights of children, the need for rules and regulations in schools and how both can operate side-by-side. Opinion pieces from Mrs Grace Eshun Headmistress of Ghana International Schools and music icon Samini are few examples of the nuanced perspective on the matter. This piece is geared towards putting the debate into its proper perspective, clear some misconceptions, emotional outbursts, misinformation and unhealthy dogmas but also to highlight the genuine interests by some to correct injustices within our educational system.

You may have heard a lot of people blaming the low hair cut rule in our schools on colonial masters and why they think the policy is a continuation of the colonial mentality to strip the Ghanaian of his dignity and his or her sense of self. This rule has nothing to do with slavery or colonial mentality. If anything, it has everything to do with Kwame Nkrumah’s vision of using education as a tool for peace building and national cohesion. I will delve deeper into this but let me first establish the role and power of hair in our socio cultural development.

DS Essah (2008) in her “Fashioning the Nation: Hairdressing , professionalism and performance of gender in Ghana, 1900-2006”lucidly chronicled the spiritual (ethnic), economic, (status) political (symbol of power) expressions of hair before and after independence. Hairstyles have always been a medium of communication. Essah also highlighted how the power of hairstyles was used in arguably one of Ghana’s best local movies of all times “I Told You So” and how Elizabeth Sheppard, the makeup artist of the movie built her status, wealth around the power of hair. In the Akan tradition as DS Essah rightly pointed out, long-hair was portrayed as one of the attributes of sasabonsam, a powerful deity in the dense forest. Some of the hairstyles were also symbols and representations of power and status. For instance there was the ‘atiko pua’ hairstyle which was only meant for queen mothers and her princesses; no one was allowed to wear such a hair style.

Now, after colonialism a number of hairstyles, evolved just to respond to the vestiges of colonialism and to exemplify the African identity. Key amongst them was the afro and wigs. So right from the 60s our mothers and fathers were often spotted with wigs and afro long hairs, with combs specifically made to symbolize black power.

Schools are extensions of our homes. Whatever we do in our homes we are likely to do them in schools if they are not regulated. As Bush and Saltarelli (2000) will have it, “Children do not come to the classroom as blank slates”- they bring accompanying practices, attitudes and behaviors. These afro and the hairstyles communicating all manner of things, I reckon found its way into schools from the basic right through to the higher levels of learning.

Education for peace and national cohesion

With this background on hair and all its representations, can we go back to Nkrumah’s vision of using education as a tool for national cohesion and peace building. Shall we? There was a time in our history where the survival, peace and unity of our nation demanded that all ethnic, religious, creed, and other representations be sacrificed for the sake of one national identity. Nkrumah gave little room for expression of anything of power, ethnic, religious origins in schools especially the basic schools which now include secondary school, whilst still promoting peaceful coexistence amongst ethnic groups through the boarding system of education. There was the need to ensure some level of uniformity and conformity to a national identity. How could he achieve that if one student brought a hairstyle representing how wealthy and powerful she was and another feeling unsafe in a school environment because a colleague is wearing a long hair that has come to be associated with sasabonsam. How could he achieve that if one student came in a wig or an afro with combs, pens sticking out of their hairs or another with scalp showing like a new slave or a product of ‘dipo’ prepared to be shipped off to a man? So yes, cutting your hair low (without showing your scalp), no matter your ethnic, religious, status affiliation was a requirement for admission in public schools.  If you doubt it, just take a look at pictures and read the philosophies of Nkrumah’s Young Pioneers. 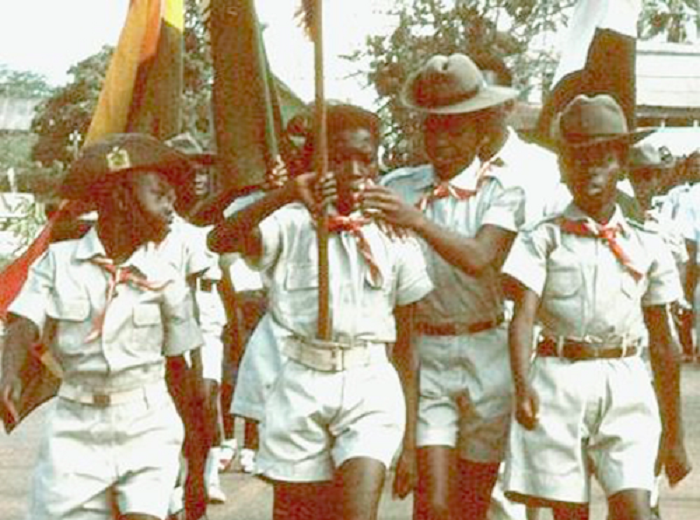 The school was essentially a place for the kids to learn about national ideals. I dare say that the “No vernacular” dictum which was dutifully implemented across all schools was in furtherance of the national agenda whilst still giving room for some major local languages to be taught. Were there people who kicked against this policy by Nkrumah? Yes and they were referred to as “neocolonialists.” Were the rights to free expression of religion, ethnic, identities taken away from people. Yes!! Was this policy in the best public interest of the country at the time? Yes!! I have no doubt. All around Ghana, including Nigeria, Cameroon Rwanda, Burundi, Ivory Coast, name it, countries have imploded at one point or another because religious, cultural and ethnic expressions were allowed without a shred of allegiance to a national cause. Even in Ghana, wherever religious/ethnic sentiments have dominated we have seen violent conflicts.

So these rules in schools, including the low hair cut have served us well, never mind the view of how backward, mindless and bigot’s supporters of the rule have been described this past few days.

Now did the 1992 Constitution in Articles 21, 17 (2) explicitly take away these rules from the schools knowing too well, the history of our country and what our ethnic, religious affinities can do if they go unregulated  in schools? I am not a lawyer, yet, but I do not think so. There are have been mixed interpretations to the Article 14 1 (e) of the Constitution which allows, for the purposes of education and welfare of the kids, for their personal liberties to be curtailed. And while our 1992 constitution is open to the expression of rights it has given situations where, in the public interest, the rights can be curtailed. Is the policy against the expressions of religious, ethnic and other creed still relevant today, as it was immediately after independence? Yes. I sincerely think so. Must we allow, the kids from 10 to 18 come to school with the best and worst of everything in their ethnic, religious backgrounds? I sincerely don’t know. But what I do know is that if you allow hair to be expressed with all the ethnic, religious and status symbols it comes with, you cannot prevent another who believes the wearing of amulet around his wrist or waist for protection from expressing himself. Will the floodgates be opened if Tyrone is allowed? Well if the floodgates are still present, you can never tell.

So yes, if the supporters of Tyrone want him in the school with his hair on, they must as well accept all forms of religious and ethnic expressions in our schools, not just hair. Will it be a safe environment for the kids to learn? Maybe, maybe not. America is a blessed country but its rules, laws are fashioned along their age-long beliefs, cultures, political history. Each country has laws that have roots embedded in the culture, history, politics of that country. We can and should, as a country take a second look at our rules but not be oblivious of where we have come from as a country.

NB: My name is Nathan Gadugah, a Dangme with an Ewe name, with very close friends who are Gas, Ashantis, Ewes, Hausas etc; a devout Christian with many Muslim friends some of whom have become brothers; a man who loves women and fights for their interest in educational/corporate settings and other places where rights are trampled upon; a  Ghanaian villager who has travelled to at least four other countries, including Nigeria and UK; a disappointed footballer who played Colts/Interco football with Asamoah Gyan, ‘Rastaman’ Konadu, Adamu,(Sariki a Muslim playmate) at BT International and shared Christian and Muslim prayers before and after matches; lived in La, Teshie/Kotobabi/Newtown a Muslim community. I am also a journalist, writer, PR consultant. I cannot for the life of me, be anything close to bigotry and or have any prejudices the kind which have been attributed to some of us for holding a different opinion.

Dumsor is back! – GRIDCo in talks with ECG for loadshedding timetable

By NEWSWIRE GH2 days ago
Opinions

By NEWSWIRE GH4 days ago
Opinions

By NEWSWIRE GH6 days ago
Opinions