The Minister of Energy, Dr. Matthew Opoku Prempeh has said Ghana and other oil producing countries in Africa must be allowed to grow their renewable energy mix at their own pace.

He said as the world moved towards cleaner energy for the future, this global advocacy had not been lost on Africa but pointed out that the continent must be allowed to do this at its own rate.

He said although Ghana and the rest of Africa remained committed to its SDG 7 goals and had been working towards clean energy in its energy mix through several initiatives and policies, the fact, however, remained that gas, especially Africa’s Liquefied Natural Gas (LNG) was the cleanest of fossil fuel and harnessing it to power generators could make a huge impact on the drive to accelerate universal coverage.

Dr. Opoku Prempeh said this when he opened the Ghana pavilion at the Offshore Technology Conference (OTC) currently ongoing in Houston, Texas. The conference brought together international players in the global oil and gas industry.

According to him, without a clear and purposeful drive towards cheaper electricity through gas exploration, Ghana’s goal of universal coverage and industrialisation would make little or no impact.

“We cannot ,therefore, take oil and gas exploration out of our conversation towards a sustainable future and our aim of eliminating energy poverty (The lack of access to sustainable modern energy services and products), since our needs and priorities are vastly different from those of industrialised countries as we are at a different stage of our growth process,” he stated.

Dr. Opoku Prempeh told the international players in the global oil and gas industry about the government’s resolve to become a hub for refined petroleum products in the West African sub-region and beyond by the year 2030.

The hub, he said involved the development of infrastructure such as refineries, port terminal facilities, storage facilities, petrochemical plants, as well as Liquefied Natural Gas (LNG) terminals with a network of pipelines.

“In addition, it is within our plans to develop Compressed Natural Gas (CNG) facilities to serve as alternative sources of fuel for transportation.

“The CNG is a cheaper and cleaner fuel than the other fossil sources and its use is in line with our broader goal transition progressively from the carbon-intensive sources to low carbon sources of energy,”, he told investors who thronged the pavilion to know more about Ghana’s prospects in the petrochemical industry. 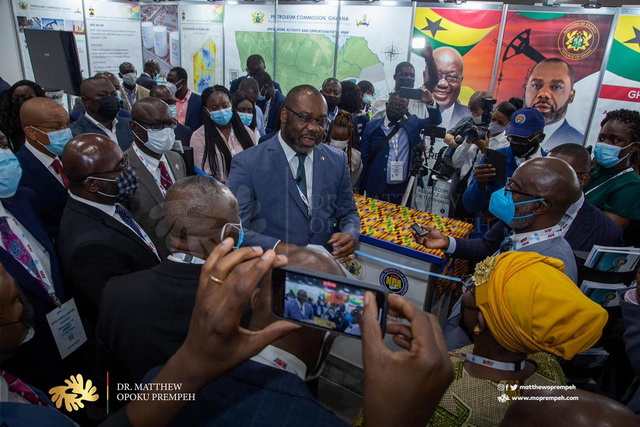 The Special Advisor and Partner to the McDan Group, Mr. Benji Kwesi Tackie, said the group was aligned with the government’s vision to support local companies and support the drive for foreign direct investment.

He commended the Houston Ghana Chamber of Commerce, which had been the major brain behind the organisation and expressed the hope that the event would inure to the growth of the sector.

By NEWSWIRE GH6 days ago
Business